From the SF Chronicle:


On Tuesday, Yudof asked the acting police chief to get criminal charges dismissed against 10 protesters involved in Friday's demonstration and said the school would pay the demonstrators' medical bills. He also named William Bratton, a former Los Angeles police chief, to direct a review of the pepper-spray incident.

One has to say, that if those are the qualifications for leading the review of the pepper spraying "incident," a much better option was available just a few miles up the road from the President's office.
Posted by Aldo Antonelli at 21:27 No comments:

As we know the Davis Chancellor addressed the 5,000 participants at the rally held today on the UCD quad: the full 2:44 minutes of her emotional speech can be viewed here. She apologized for Friday's "events" and vowed to work to re-gain the students' trust. That cannot have been easy, and it certainly took courage. But equally important is what she did not say. For instance, here is something many were expecting to hear:


The Chancellor will ask the Yolo County DA to drop all charges agianst the arrested students.

This is so obvious it is a no brainer, and yet nothing was said in this respect. Here is another one:


The Chancellor will make sure that all riot control equipment on campus is removed from possession of UC PD.

Again, nothing in this direction. Or one more:


The Chancellor will make an explicit commitment to safeguard free speech and other constitutional rights on campus.

The list could go on, including working with the students to reverse tuition increases, working with faculty to restore shared governance, respect the right of workers and staff to unionize and engage in collective bargaining. But none of that was forthcoming today. Perhaps tomorrow?
Posted by Aldo Antonelli at 21:26 1 comment:

Faced with intense pressure and stinging criticism following the pepper-spraying of non-violent protesters on her campus, UC Davis Chancellor Linda Katehi should do what responsible administrators always do under the circumstances: find a scapegoat.

In these difficult times, the Chancellor's mind must certainly be considering the central question: who? who should I fire to save my own job?

One obvious candidate is UC Davis Police Chief Annette Spicuzza, whose transparent deception in relating Friday's events makes her a clear choice.  She declared that her officers were surrounded by a crowd and had to resort to pepper-spraying to make their way out of the difficult situation. But she should have been aware of a saying, in the language of her forebears: le bugie hanno le gambe corte — lies have short legs — and lies certainly don't go very far these days when everybody carries a high-resolution video camera in their pockets. 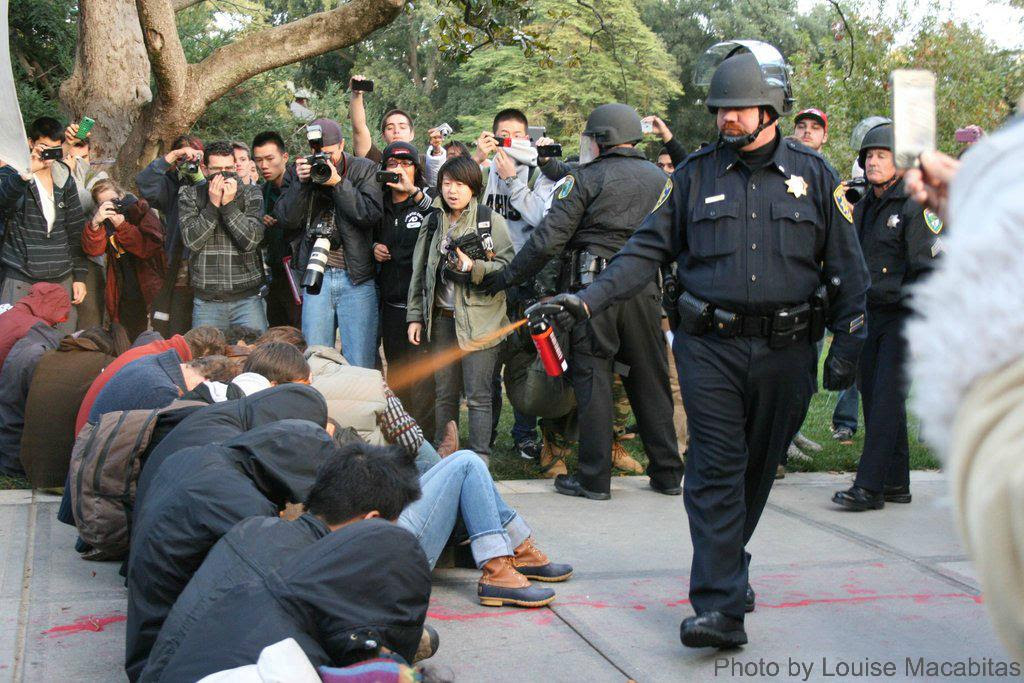 But scapegoating is an ancient and delicate art, whose fundamental principle is that you should go as far down the command ladder as you can get away with.

In this respect, we would like to suggest that UC Davis Police Lt. John Pike, who is the primary pepper-sprayer of the whole episode, would make a much more suitable target. The look of a VoPo in a Darth Vader costume, the nonchalant attitude with which he sprays children (children!) sitting on the ground, his leisurely stroll as he inflicts chemical burns on non-violent students, not to mention his girth (well-fed by those very students' tuition money): he's the ultimate incarnation of the banality of evil. He's absolutely perfect, the perfect fall guy. Your own job is safe, Chancellor Katehi.
Posted by Aldo Antonelli at 07:10 1 comment:

It seems like UC Davis Chancellor Linda Katehi finally succeeded in her stated goal to obtain much deserved national recognition for her campus.
Posted by Aldo Antonelli at 17:50 No comments:

The dirty secret behind UC privatization

There is much to think about in Nathan Brown's remarks, delivered at the Tuesday day of protest, even if one does not agree with everything he says. In particular, his claim that in many ways UC likes to replace state funds with student tuition, seems right on the mark. State funds are restricted, and they can mostly be used for instructional purposes. Student tuition is unrestricted, and it can be used, for instance, as collateral for bonds intended to finance capital projects (a point Bob Meister has been making for quite some time).
Posted by Aldo Antonelli at 08:44 No comments:

Only for the fourth time in history, the UC Board of Regents has cancelled a meeting, apparently out of concern that protests planned concomitantly with the meeting might turn violent. Oh, c'mon, really? I am sure a few baton pokes from UC PD officers would have sufficed in keeping the distance between the ragged and smelly students and the highest officers of the University.
Posted by Aldo Antonelli at 09:02 No comments:

UC Davis has released a white paper outlining a proposal for a "new budget model" (we had discussed something similar back in February). The proposal is in line with, but independent of, the "Funding Streams" model being implemented by UCOP, and similar to the corresponding allocation schemes at Michigan or Minnesota. The leading idea of Funding Streams is that revenue is to remain with the campuses that generate it (hence, for instance, Berkeley's push to enroll more out of state and international students). The Davis proposal brings this idea down to the different units on campus ( a "unit" is defined, for the purposes of the white paper, as anything headed by a Dean, or the equivalent of such). Revenue generated at UC Davis — i.e., student tuition and indirect cost recovery from grants —would be allocated to the units proportionally to the amount of student tuition and grant dollars generated. The central campus would then assess a "tax" on such revenue (including return to aid) supposedly in proportion to resources each unit is using.

This is the main idea. The details are worth a look, too. First of all, "student tuition" means blended tuition, i.e., a campus-wide average of in-state and out-of-state tuition. This way, although the campus has a strong incentive to recruit out-of-state students, no single unit does. Second, part of the moneys recovered through the assessment would go (besides support for shared resources, such as the central library etc.) to fund a "Provost Supplement" allocated centrally to the units in order to further the campus' strategic goals. Finally, it's noteworthy that there is no presupposition that the Deans will, in turn, allocate resources within their own units according to anything resembling the same principle. So although cross-unit subsidies would (presumably) be curtailed, departments within each unit would still be jockeying for increased resources. The proposal also addresses the issue of how a student's tuition is to be shared between the unit teaching the class and the unit hosting the student's major (answer: 65% to 35%).

The proposal is to be praised to the extent that it brings a measure of transparency to an otherwise totally mysterious process. It is also, to an extent, a transfer of power from central administration to the Deans, for better of for worse. But it does nothing, by itself, to address budgetary shortfalls: while units in the sciences are motivated to increase the number and size of their grants (although grants are, as finally acknowledged, a net loss to the university), the number of student credit hours is more or less fixed, certainly in the short term. So the units, especially the ones that rely on teaching vast numbers of undergraduates, would essentially be engaging in a zero-sum game.

It remains to be seen whether the proposal, strongly advocated by Chancellor Katehi, will be favorably received at UCOP (probably yes) and on the other campuses across the system.
Posted by Aldo Antonelli at 06:57 1 comment:

Welcome to the California Professor

A place for random rants, timely bits of information, and occasional analysis, on issues concerning UC, its faculty, staff, and students. Email me with any suggestions or feedback.